Mixing different species of birds in an aviary is incredibly popular for many reasons. Some want to create an aesthetically pleasing mix of different colors, others try to create region-themed “habitat aviaries”, while others simply don’t have enough space to house all their young birds prior to sale.

Housing parrots and finches in the same aviary is certainly achievable, but it should only be attempted with certain species and with a great deal of care taken to minimize the risks.

The most significant risk involved with housing parrots and finches together is the size difference between the birds. Squabbles and territorial disputes between birds housed in close proximity are common, but a fight between a parrot and a finch is almost always going to end badly for the finch.

Parrots and finches in a confined space are also prone to mid-air collisions – especially when startled. When two birds of substantially different sizes collide, the impact on the smaller bird could be fatal. 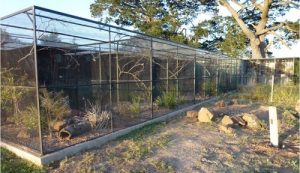 Finches and parrots usually have different dietary requirements. It is possible to mix parrot seed and finch seed together in one feeding station, but in the interest of aviary harmony multiple feed stations should be provided. 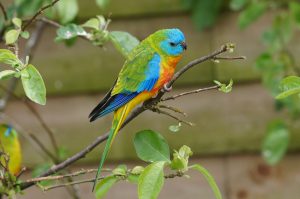 Parrots in the Neophema genus are most commonly housed with finches. These include the Scarlet-chested parrot, Turquoise parrot, Elegant parrot, rock parrot, Blue-winged parrots; plus the closely related Bourke’s parrot. They are arguably the most placid parrot commonly available in aviculture and rarely show aggression, although the suggestions above should still be implemented – especially during their breeding season.

The smaller lorikeet species, such as the Little lorikeet and Purple-crowned lorikeet, have been successfully housed with finches by some keepers. Once again, this is only achievable with a very large aviary. Lorikeets also have challenging dietary requirements that make them unsuitable for beginners.

Larger parrots like the humble Cockatiel or the Plum-headed parakeet can also be housed with finches. Levels of aggression vary between individual birds so it’s important to monitor the aviary diligently. It’s usually necessary to separate the parrots during the breeding season when they are most aggressive.

While housing finches and parrots together is achievable and produces a stunning mix of colours, breeding results are almost always lower than those achieved in single-species aviaries. Ultimately it’s up to you to decide whether the aesthetic advantages outweigh the risks and costs.

20 thoughts on “What parrots can be kept with finches?”