The Scarlet-chested parrot is a small parrot found in central Australia. Thanks to their low requirements, quiet temperament and docile nature; they have become immensely popular as aviary birds throughout the world. Numerous colour mutations have been developed in captivity, including red-fronted, par blue, sea green, white fronted blue, cinnamon, lutino and fallow. 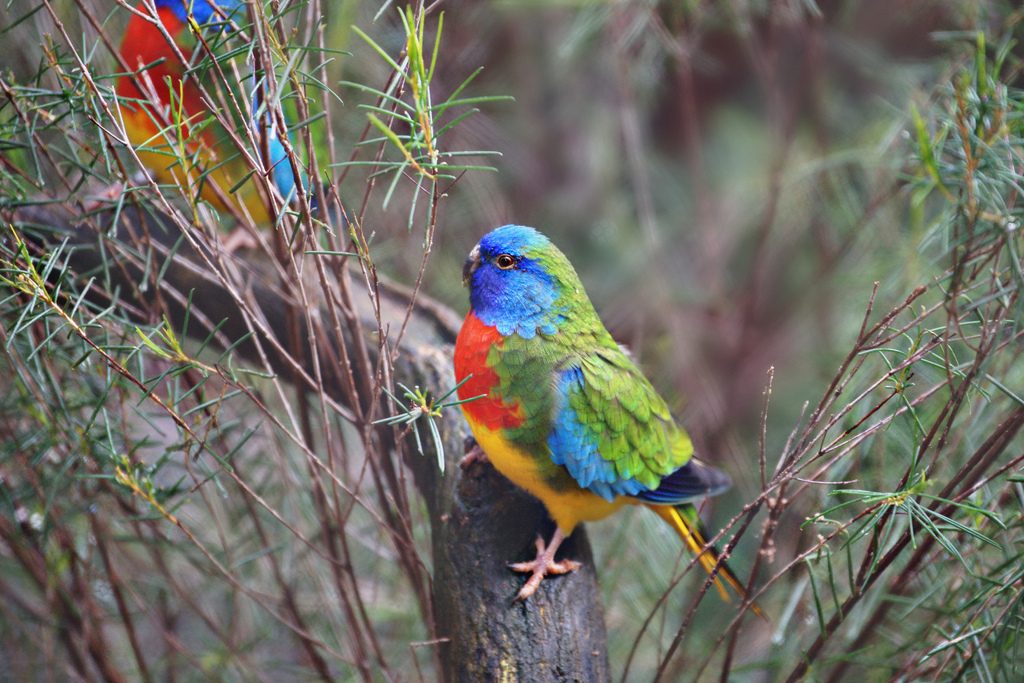 A high quality seed mix forms the basis of the Scarlet parrot’s diet. Large bags of small parrot mix or Peachface seed mix can be purchased from reputable aviary stores. Seed should be stored in an airtight plastic drum to prevent exposure to vermin and moisture. Seeds can be soaked or sprouted to improve their nutritional value.

Scarlet-chested parrots love to eat green seeding grasses, just like their cousins in the wild would. Unless the aviary is immensely large and grasses can grow faster than the birds can consume them, it may be necessary to plant seeding grasses into pots which can be rotated out to allow the plant to recover. It’s a good idea to plant some of your purchased seed mix in pots, not just because birds love seeding grasses, but to confirm the quality of your seed supply.

Scarlets should be provided with a wide variety of fruit and vegetables. Green leafy vegetables are especially important. Kale, bok choy, endive, corn, apple, pear and carrot are particular favourites. As with all birds; Avocado, chocolate, caffeine and alcohol are toxic and should not be fed.

They are known to sometimes consume insects when breeding, especially if housed with other insect-eating bird species from whom they can learn this behavior. Mealworms are most commonly offered. Nutritional supplements such as soft foods and pelleted food can also be offered.

Scarlets will breed from twelve months of age, however best results are achieved at two years and onwards. They breed from Spring through to early Summer and use a medium sized nesting box. They can produce up to three clutches per year, each containing between 3-6 young. Eggs are incubated for approximately 18 days and fledge the nest at four weeks of age. They become fully independent 3-4 weeks later.

Young birds can be safely housed with their parents, however it’s generally advised to remove them when possible to allow the breeding pair to commence their next clutch. Young birds are generally poor at flying and can injure themselves crashing into the aviary wire. Foliage carefully placed at the end of their flying paths can be used soften their landing somewhat.

Scarlets can be kept in a wide variety of different aviary types, including cages, traditional aviaries and suspended flights. These birds love to forage on the ground, so care should be taken to prevent parasite infection.

Scarlet chested parrots are immensely placid and can cohabitate with other small placid parrots, finches and quail. Do not house them with other species in the Neophema genus, as hybridization may occur.

Scarlets should be provided with an adequate amount of flying space to ensure they receive sufficient exercise. Birds that do not have room to fly may suffer from stress or obesity. Two meters of uninterrupted flying space is recommended.

Non-toxic leaves and branches should be provided for chewing. They will be destructive to foliage in a planted aviary.

As a grass parrot species, Scarlet parrots spend a significant amount of time foraging at ground level. It’s important to keep the aviary floor clean and dry. A preventative worming and parasite control regime should be used.

Scarlets are considered to be “softer” than other species in the Neophema genus. They need to be protected from cold, wet, and windy conditions.

A healthy Scarlet-chested parrot has a life expectancy exceeding 15 years in captivity. Some sources claim to have observed birds exceeding twenty years of age.