The Australian King Parrot is a medium-sized parrot found throughout the eastern parts of Australia, from Victoria all the way up to Queensland. They are equally at home in Eucalyptus forests, subtropical rainforests, open woodlands, and temperate rainforests. Their striking red colouration makes them a popular and readily-available bird in Australian aviculture, but they are relatively unknown outside of Australia.

King parrots should be housed as one pair per aviary, in an aviary that’s at least three metres long. Both suspended aviaries and traditional aviaries are suitable housing options.

They are enthusiastic chewers and need to be provided with natural non-toxic branches and perches to provide stimulation. Seeding or flowering branches are especially enjoyed, but will need to be replaced often.

King parrots like to nest in a shaded area of the aviary, in a nestbox or hollow log that’s well above ground level. Provided a small amount of shelter is necessary for good breeding results.

A quality small parrot seed mix forms the basis of the king parrot’s diet. Seed should be stored in an airtight plastic container to prevent exposure to vermin and moisture. Seed can be soaked or sprouted to improve its nutritional value.

Many breeders prefer to feed parrot pellets instead of seed. Pellets provide a more balanced intake of vitamins and minerals and produce less waste. Commercial supplements such as egg & biscuit mix can be added to the diet to provide additional protein during the breeding season.

Do not feed anything from the list of forbidden foods. 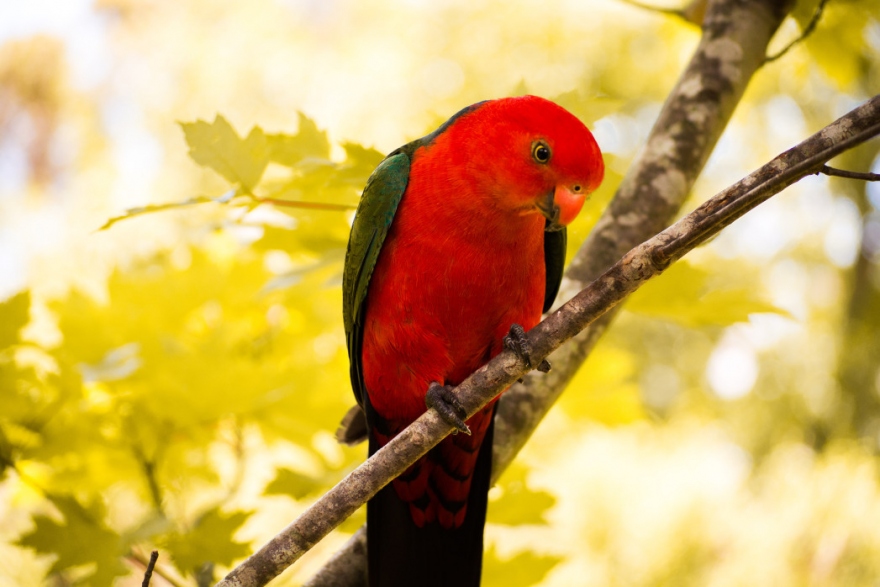 A compatible pair of king parrots will breed from spring through to summer. Allowing birds to make their own partner selection leads to superior breeding results.

The pair should be offered a variety of different nest boxes in different sizes and locations. The box should be positioned at a slight angle and have a substrate of wood shavings or saw dust. Once the hen has made her nest box selection, the other boxes should be removed.

The hen will lay 4-6 eggs, usually one every second day, and then incubate them alone for approximately three weeks. After hatching, the chicks will take about five weeks to emerge from the nest, and be fully independent three weeks later.

The young birds can generally be kept with their parents until maturity, however they must be separated immediately if the parents show any aggression towards them.

The hen may produce up to two clutches per year. Further breeding beyond this should be discouraged, as overbreeding can be damaging to the health of the hen bird.

Mutations are rare and should not be considered “established”, however they do exist. Green and grey birds are well documented, as are cinnamon and blue mutations. Expect to pay thousands or tens of thousands of dollars for a mutation king parrot.

With proper care, a king parrot may live for up to 25 years.