Chaffinches are a common finch found throughout Europe and parts of northern Africa. Despite being abundant in their natural range, they are somewhat rare in Australian aviculture and numbers appears to be in decline.

Chaffinches are best kept as single pairs in a fairly large aviary. They seem to cohabitate reasonably well with other placid species, but as always, monitor for signs of aggression and take steps to manage it.

Chaffinches should not be housed with any other member of the “true finch” family, as they will readily hybridize. This family includes canaries, goldfinches, siskins, and dozens of other species.

As with all birds, they do best in large aviaries with natural perches and plenty of space to fly around.

Chaffinches are more insectivorous than other bird species in their family. During the breeding season, they switch to a diet almost entirely comprised of live insects. In the wild, caterpillars form a major part of their breeding diet; but fortunately they readily accept mealworms, maggots, moths, and other easy to produce live food when kept in captivity.

During the non-breeding months, they will revert to a more omnivorous diet of seeds and greens. A seed mix formulated for canaries is suitable for Chaffinches, but it must be supplemented with leafy vegetables such as kale, endive, and silverbeet. Green seeding grasses are also much appreciated when available. 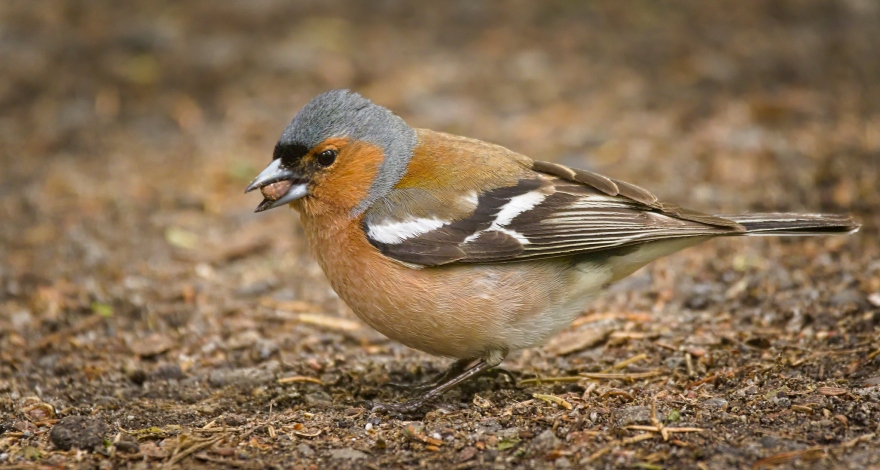 Chaffinches become much more active in the breeding season. The male will begin to chase and harass the hen in early spring until she commences construction of a nest.

As mentioned previously, a steady supply of live food is essential to successfully breed chaffinches.

They are a cup nesting species, but prefer to construct a natural nest in shrub rather than use a commercial canary cup nest. Chaffinches generally construct very neat and sturdy nests.

The hen will lay 3-5 eggs and incubate them alone for just under two weeks. Chicks only take two weeks from hatching to begin fledging the nest, and will become fully independent about a month later.

They will usually raise one or two clutches per season, stopping once the weather becomes too hot.

It’s quite easy to visually sex mature Chaffinches once you know what to look for. Males will have deeper rust-coloured features on their head and chest, while females appear a much duller grey colour.

A strict worming and parasite control regime is essential to ensure the long-term health of any finch collection. Chaffinches consume a large amount of live food, making them particularly susceptible to roundworms and other parasites that commonly affect insects.

Chaffinches can to live up to 8-12 years in captivity when provided with a correct diet.