The Rose-ringed parakeet; known as the Indian Ringneck parrot within the Anglosphere, is a medium-sized parrot indigenous to Asia. Four subspecies are recognised, two of which are found predominately in central and west Africa. Large naturalised feral populations also exist throughout South Africa, East Asia, the Middle-East, Europe, and the United States.

The Indian Ringneck has been kept in captivity for over a millennium and today is one of the most popular birds in the pet trade. Dozens of color mutations have become available and the species is often among the most affordable larger parrot available.

Indian Ringneck parrots are not suitable for mixed species aviaries and are best housed as single pairs. Small colonies can be housed together in very large aviaries (1,000 square feet and upwards), but the best breeding results are rarely achieved in this setup.

Indian Ringnecks must be provided with an adequate amount of flying space to ensure they receive sufficient exercise. Birds that do not have room to fly may suffer from stress or obesity. At least three meters of uninterrupted flying space is essential. Five meters or more is recommended.

Branches from non-toxic trees should be provided as natural perches. The birds will also enjoy chewing on bark, leaves and seeds for entertainment and beak exercise.

Protection from wind, rain and temperature extremes must be provided.

Indian Ringneck parrots have been known to hybridize with other Asiatic parrot species – particularly the Moustached parakeet and Alexandrine parakeet. To avoid producing hybrid birds that damage the captive gene pool of each distinct species, these birds should not be housed together. Hybrids between Blossom-headed, Slaty-headed, and Plum-headed parakeets have also been reported.

Seed forms the basis of the Indian Ringneck’s diet. A parrot seed mix with a good amount of sunflower seed should be offered. A seed-based diet is only sufficient only combined with a variety of fruits and vegetables.

Pellets can be used a more nutritious alternative to seed, but many birds are unwilling to consume them.

Indian Ringnecks prefer sweet juicy fruits such as apple and pear; however it’s important that more nutritious green foods are included in their diet. Broccoli, kale, silverbeet (chard) and bok choi are especially nutritious – as are corn, cucumber, peppers and berries.

Some birds will consume live insects during the breeding season. Mealworms are generally the most available live food available and will be consumed in their larvae, pupae or beetle form. Insects are a good source of protein for young birds, but are not required to achieve good breeding results.

Indian Ringnecks are usually reliable breeders and make excellent parents. They will typically produce one clutch per year, however a second clutch is not unheard of.

Breeding usually commences in spring as the weather begins to warm up. The male will court and feed the hen, who will begin inspecting available nesting boxes.

Incubation is performed exclusively by the hen and lasts for roughly three weeks. Young birds will fledge at 6-7 weeks of age and become fully independent from their parents a month later. Young birds can usually be housed with their parents until the next breeding season, but they must be separated immediately if aggressive behavior is observed.

Indian Ringnecks will accept a wide range of different nesting boxes or logs. A commercial nesting box designed for medium-sized parrots – either rectangular or Z-shaped – is ideal. An inch-thick layer of shaved pine or sawdust should be placed in the bottom of the nest. 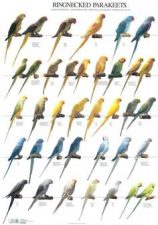 Dozens of Indian Ringneck color mutations have been established in aviculture. Blue, grey, yellow, lime, cinnamon, and white are all very common.

Only male birds possess the dark colored ring around their neck.

Indian Ringneck parrots are a hardy and resilient species, but the following preventative health measures should still be taken.

Remove fresh food before they begin to rot or ferment.
Well looked after Indian Ringneck parrots will live for 20-30 years.