The Gouldian finch is a small, colorful finch endemic to Australia’s savanna woodlands. Despite their rapidly declining wild population, they are quite common in the pet trade, where dozens of colour mutations have been established. Wild-type Gouldians can have either red, orange, or black heads. 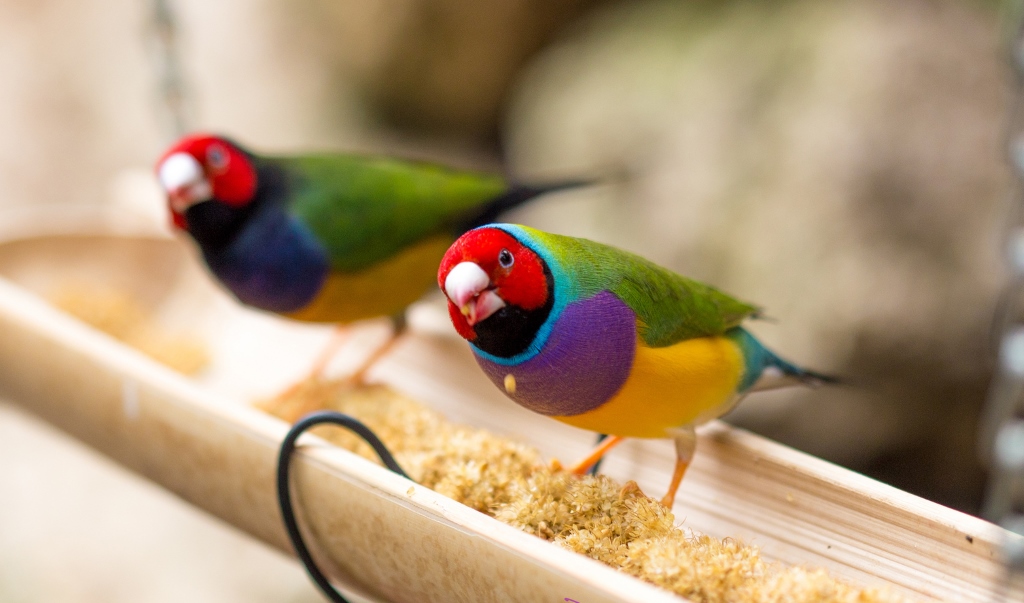 Gouldian finches can be housed successfully as single pairs, a colony, or as part of a mixed collection. They prefer a large planted aviary, but are generally tolerant of smaller aviaries or even a large flight cage.

Gouldians originate from a hot tropical climate and don’t possess down feathers, so care must be taken to protect them from cold weather. The aviary should be designed to limit exposure to draughts, winter rain, and temperature extremes.

Gouldian finches are generally very placid in a mixed aviary situation. They can be successfully housed with most placid finches, quail, doves, and (space permitting) Neophema parrots. They are a larger-sized finch and can be assertive during the breeding season, so it may be necessary to avoid housing them with small species if you have smaller aviary.

The Gouldian finch breeding season begins in late summer and continues through to the end of autumn. They prefer to nest in small budgie-style boxes. Gouldians will breed as a single pair, in a colony of other Gouldian finches or as part of a mixed collection. If not breeding as a single-pair, you must provide more nest boxes than finch pairs to reduce competition.

Gouldians are poor nest builders, so it may be necessary to construct a nest on their behalf using fine strands of dry grass.

A clutch typically consists of between 4 and 8 eggs. Both parents take turns incubating the eggs for two weeks. Once the eggs have hatched, the parents should be supplied with a wide range of nutritious food, especially those high in calcium to assist in bone development. The young Gouldians will leave the nest at approximately 20 days of age, after which they will (generally) not return to the nest.

Juvenile Gouldians are pale green/grey and will remain that color until they moult into their adult feathers. The moult starts in about July in the southern hemisphere or February in the northern hemisphere, and takes 3-4 months to complete. Juveniles born late in the season will do a partial moult and then reach their full adult plumage the following year.

The breeding performance of a Gouldian pair will generally decrease after about four years of breeding. Some breeders like to retire their older birds (by moving them to a non-breeding aviary) to free up nest sites for more productive pairs.

Female Gouldians have less vibrant coloring than males. Some color mutations are challenging to visually sex—especially those where the male’s coloring becomes washed-out.

There are dozens of different Gouldian mutations available throughout the world. Some of them have only been established in specific regions, such as the Australian yellow. Pure wild-type birds are becoming more difficult to acquire.

Seed forms the basis of most Gouldian finch diets. Unfortunately seed is lacking in many essential vitamins and minerals which must be compensated for by introducing other foods. Sprouting seed increases its nutritional value and is a cheap way to improve your birds health. Freshly grown green seed heads should also be offered frequently.

Kale, bok choy, chard (silverbeet), endive, cucumber, and finely grated apple, carrot or broccoli are much loved by Gouldians. Spinach can also be given, but only sparingly as it can contribute to calcium deficiency.

Commercial soft finch food mixes can also be provided for an added nutrient boost, particularly when breeding. Egg and Biscuit mix is a favorite. Gouldians do not typically eat live insects. If there are other finches in the aviary that consume live food, the Gouldians may follow this behavior.

Do not feed anything from the list of forbidden foods.

Gouldians are more “fragile” than many other Australian finch species. Good aviary hygiene practices and protection from temperature extremes is essential. They are especially susceptible to air sac mite and scaly leg mite, both of which can be controlled with a strict worming/parasite control regime.

A healthy Gouldian finch can live up to ten years.