The Eclectus parrot is a medium-large parrot found in Australia, Solomon Islands, Sumba, New Guinea, and the Maluku Islands. They are immensely popular as pets and have a reputation for being friendly, intelligent, and inquisitive. The species is noteworthy for its extreme sexual dimorphism. Male eclectus parrots are emerald green with a yellow and orange beak, while females are red and purple with a black beak.

Eclectus parrots should be housed in a single-pair aviary of at least five meters (16ft). Sufficient space for flight is essential to ensuring health and fitness.

An Eclectus parrot’s aviary should be protected from temperature extremes. Being native to tropical climates, Eclectus parrots are less tolerant of extreme cold than many other parrot species.

Natural perches made from non-toxic branches should be provided. They will need to be replaced periodically as Eclectus parrots enjoy chewing.

A quality small or medium parrot seed mix forms the basis of the Eclectus parrot’s diet. Seed should be stored in an airtight plastic container to prevent exposure to vermin and moisture. Seed can be soaked or sprouted to improve its nutritional value.

Fresh food should be a significant proportion of the Eclectus parrot’s diet. Fruits, vegetables, nuts, and leafy greens should be offered daily and represent at least 50% of their daily consumption. Uneaten food should be discarded daily to prevent contamination.

Suitable foods include apple, pear, corn, carrot, peas, mung beans, silverbeet (chard), kale, endive, peppers, almonds, grapes; and many other bird-safe foods. Commercial pellets can also be provided, but they should not form a substantial part of the bird’s diet. 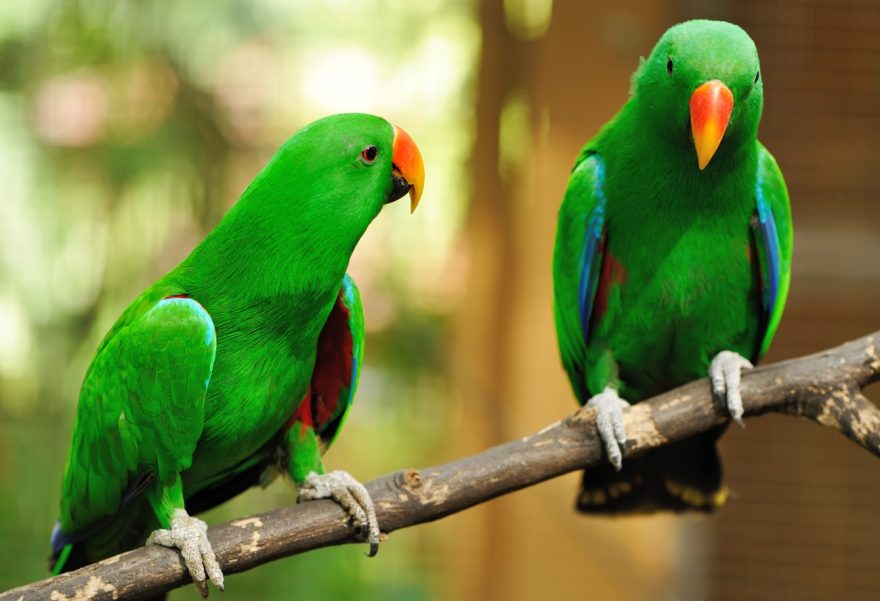 Eclectus parrots form strong lifelong pairs and will behave very affectionately towards their partner. Not all male and female birds housed together will form successful pairs, and bonding—especially between newly introduced adult birds—can take many months or even years.

They breed in hollow logs or nest boxes lined with sawdust or pine shavings. A medium-sized nest box that’s a little over a foot deep is ideal, however different birds have different preferences for the size and shape of their box.

Most parrots prefer a nest opening that’s just large enough to squeeze through, so a separate hatch for cleaning and inspection should be added to the nest box. Different nesting receptacles should be offered to determine which the pair prefers to use. Disused boxed should be removed when laying has commenced.

Eclectus parrots will generally lay 2 eggs per clutch, and produce one or two clutches per year. The hen will incubate the eggs for roughly four weeks, while the male provides her with food. After hatching, the young birds will remain in the nest for two to three months. They will be fully independent from their parents approximately a month after fledging.

Eclectus pairs will need to reach at least four years of age before optimum breeding results are achieved. Earlier attempts are prone to failure due to hens abandoning eggs or failing to consistently feed chicks.

The striking visual differences between males and females make eclectus parrots very easy to sex. They will begin to grow feathers from just a few weeks of age, making it possible to visually sex them prior to fledging.

A properly cared for Eclectus parrot will live in excess of 30 years. Individuals living for over 50 years have been documented.

Female eclectus parrots tend to be more dominant and assertive than males, making them more challenging to tame and train. Nevertheless, both genders can become excellent pets and learn to become competent talkers.