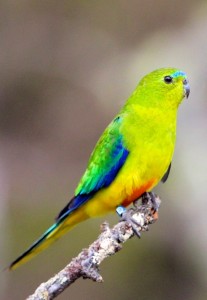 An outbreak of Psittacine Beak and Feather Disease in the wild population of the Orange-bellied Parrots has almost certainly guaranteed their demise.

There is estimated to be only 50 birds remaining in the wild, with only a few hundred living in captivity. The disease, commonly found in a wide range of parrot species; has decimated the majority of offspring produced last year, with 19 out of 26 chicks were found to be infected with the fatal disease.

Australia’s Federal Environment Minister Greg Hunt has committed $525,000 to a “rescue package;” with hopes of reestablishing the species through habitat restoration, predator removal and captive breeding.

“These funds will boost the Tasmanian Government’s captive breeding and recovery program for the orange-bellied parrot and make sure we keep the parrot’s insurance population safe, as well as look after the wild population.”

The Australian government has been financially supporting the Orange-bellied parrot recovery project for almost a decade now, yet the numbers have continued to steadily decline. Many feel that the species is beyond salvaging and conservation funds could be better spent elsewhere.

Hopefully the species can be recovered, or at the very least; captively bred in large numbers and established in aviculture.