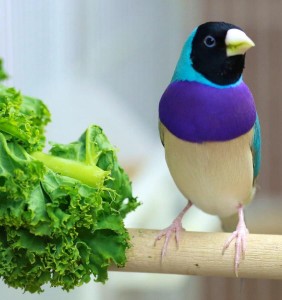 The blue Gouldian finch is one of the most prized and attractive colour mutations in aviculture. The mutation first appeared in the 1940s, but it wasn’t until the seventies that anyone had success producing them in good numbers.

In order to display the blue colouration, a finch must posses two copies of the blue gene. A bird possessing a single copy cannot express the blue color, but still has the potential to produce blue offspring if its partner can provide a second copy of the blue gene. These finches are referred to as splits and cannot be visually distinguished from a bird that does not carry the blue gene.

The blue Gouldian mutation was established through poor breeding practices, in highly controlled environments; using medication and inbreeding to quickly produce large numbers. Although significant work has been put into establishing strong, healthy lines of blue Gouldians, these birds are still quite weak compared to normal Gouldians.

As mentioned previously, Blue Gouldians are genetically weaker than normal Gouldians; so special care needs to be taken when housing them. An environment with a lot of space, plenty of shelter, excellent food and water and very few stress sources (don’t overcrowd them!) is ideal. A strict worm and disease control regime is also critically important.