Blue-capped cordon bleu waxbills are a small estrildid finch from the grasslands of East Africa. They’re slightly larger but otherwise very similar to the closely related red-cheeked cordon bleu. Australia’s captive population is secure but much smaller than the red-cheeked population due to the blue-caps being more difficult to breed. 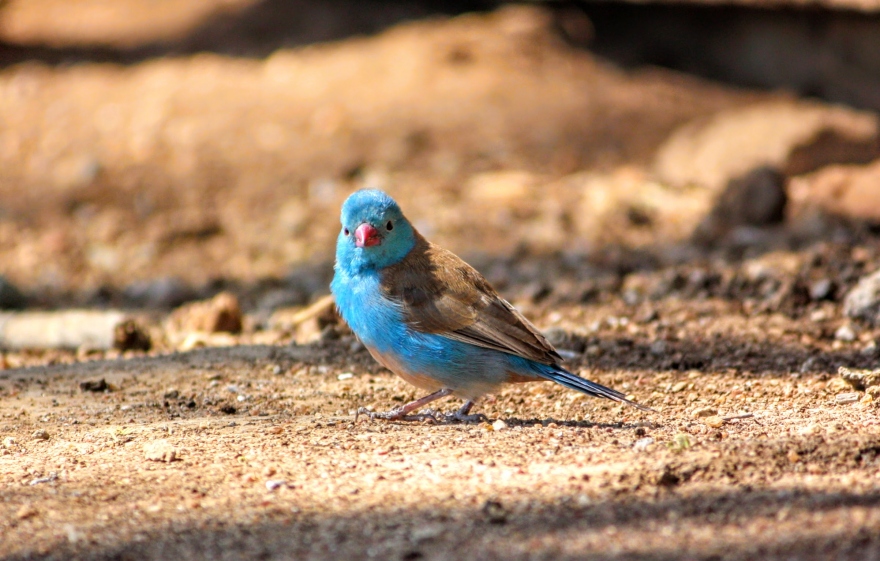 Blue-capped cordon bleu waxbills are placid birds that can be housed in a mixed finch aviary with other placid species. They do best as one pair per aviary, however multiple pairs can be housed together in very large aviaries that allow each pair to establish a distinct territory.

They do not like to be overcrowded and will often not breed if the population density of the aviary is too high.

Cordon bleu finches will not breed without privacy, so a large planted aviary that provides plenty of hiding places is ideal. They prefer to construct their own nests in thick shrubs or grasses.

A quality seed mix including canary seed, French white millet and red panicum forms the basis of the cordon bleu waxbill’s diet. Sprouting seed increases its nutritional value and is an effective way to improve your bird’s health and breeding performance. Freshly grown green seed heads should also be offered as frequently as possible. Red pannicum seed heads are particularly beloved by this species and are quite easy to grow.

Some leafy green should be provided throughout the year. Kale, bok choy, endive and silverbeet are the most nutritious and will be readily eaten. Spinach can also be given, but only sparingly as it can contribute to calcium deficiency.

Live food is an important component of the blue-capped cordon’s diet and should be provided throughout the year—especially during the breeding season. Mealworms, maggots, termites, and small crickets will be consumed readily. Commercial soft finch food mixes can also be provided for an added nutrient boost, which is especially useful when breeding.

Blue-capped cordons are a challenging species to breed. They’re known to abandon their nest and toss chicks in response to fairly minor disturbances.

Best breeding results are achieved in spring and autumn with a hen bird that’s at least 12 months of age. Better results are usually achieved in the second year of breeding. These birds demand privacy to breed successfully and will not tolerate nest inspections.

A wide variety of artificial nests will be accepted, though they prefer dense brush well above ground level. They will construct a nest from fine strands of dry grass. Occasionally they will refurbish abandoned nests—either their own previous breeding attempts or those belonging to other birds.

Do not house the different Cordon waxbill subspecies together as they may produce hybrids.

They typically lay 3-6 eggs in each clutch, which are incubated by both parents for approximately 14 days. Young birds fledge the nest at three weeks of age and are usually independent after a further three weeks. Adult plumage is attained at three months of age.

The cock bird may become aggressive to male chicks as they mature. If noticed, parents and offspring should be separated immediately.

Easy to visually sex. Females are somewhat duller than males and have light brown feathers on their head. Male heads are solid blue.

There are no established blue-capped cordon mutations in Australia, however pied (white splotched) birds are occasionally produced.

The blue-capped cordon bleu waxbill’s diet is high in live food, which makes them especially vulnerable to parasite infection. A strict worming and parasite control regime should be implemented to ensure their long-term health.

Healthy birds can be expected to reach approximately 7-9 years of age.