Alexandrine parrots are medium-sized parrots that originated from northern India, but are now established in feral colonies in Europe, the middle-east, and Hong Kong.

They are named after Alexander the Great, who is alleged to have brought many Alexandrine parrots to Europe more than 2,000 years ago.

Alexandrine parrots are not suitable for inclusion in a mixed collection and are best housed as one pair per aviary.

Alexandrine parrots should be provided with plenty of flying space to ensure they receive sufficient exercise. Birds that do not have room to fly may suffer from stress or obesity. They require a minimum of 3-4 meters of uninterrupted flying space.

Branches from non-toxic trees should be provided as natural perches. The birds will also enjoy chewing on bark, leaves and seeds for entertainment and beak exercise.

Alexandrine parrots are closely related to other Asiatic parrot species. To avoid producing hybrid birds that damage the limited captive gene pool of each distinct species, they should not be housed with any other parrot from this group.

Seed forms the basis of the Alexandrine parrot’s diet. A quality mix designed for medium-sized parrots or will be acceptable. Seed can be soaked or sprouted to significantly improve its nutritional value.

Alexandrine parrots require a wide variety of fruits, vegetables, and nuts to ensure good health. They love sweet and juicy fruits such as apple and pear, but it’s important to also provide more-nutritious green foods such as broccoli, kale, and carrot. Corn on the cob is especially enjoyed, as are peppers (chilis), berries, and natural peanuts.

Pellets can be offered as a more nutritious alternative to seed, however many birds are unwilling to consume them. Commercial fruit and nut mixes containing a mix of seeds, nuts and dried fruits can simplify the feeding requirements of these parrots.

Mealworms and other live foods may be appreciated by some birds as an extra source of protein during the breeding season. 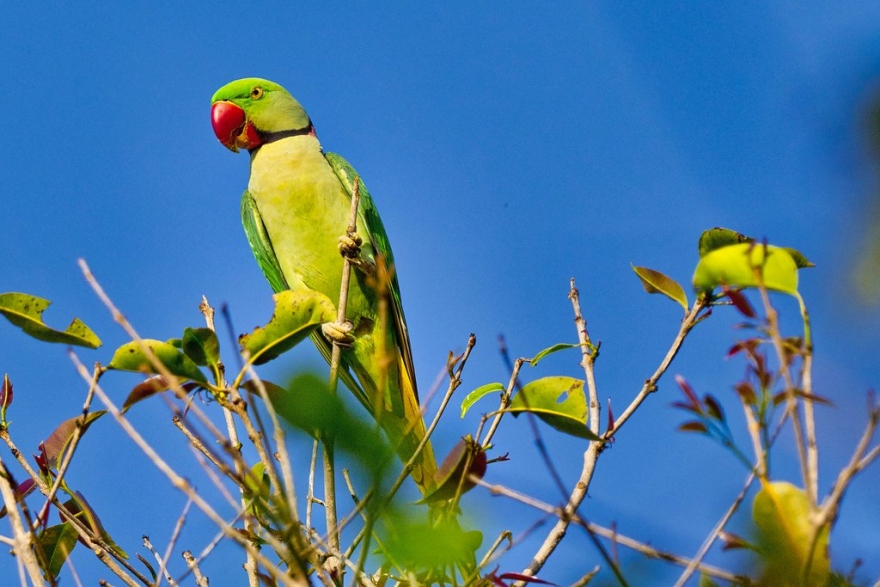 Alexandrine parakeets are generally good parents and should breed well when conditions are right. They will generally only produce one clutch of 2-4 eggs per breeding season, though some may raise a second.

Breeding usually commences in spring as the weather begins to warm up. The male will court and feed the hen, who will begin inspecting available nesting boxes. Several different nesting boxes should be provided for them to choose from.

Incubation is performed exclusively by the hen and lasts for roughly three weeks. Young birds will fledge at 6-7 weeks of age and become fully independent from their parents a month later. Young birds can usually be housed with their parents, but they must be separated immediately if aggressive behaviour is observed.

Several colour mutations have been established, most commonly the lutino mutation that sees most of the green plumage replaced with yellow.

Colour mutations have been introduced to Alexandrine parrots through hybridization with other Asiatic parrot species. Be wary of new mutations that may actually be hybrids.

DNA sexing is required to determine the gender of an Alexandrine parrot prior to its second moult. After they’ve reached maturity, Alexandrine parrots can be easily visually sexed, as only males have the black ring and pink shadow around their neck.

A properly cared for Alexandrine parrot will live for 25-30 years.