African grey parrots are a medium-large parrot found throughout equatorial Africa. They’re widely considered to be one of the most intelligent parrot species in the pet trade, and are popular as companion birds thanks to their exceptional speech mimicry skills. In Australia, they are uncommon but generally available if you’re willing to pay the $5,000-$10,000 asking price.

Most birds in Australia are kept as indoor companion pets. Even with a sufficiently large cage, they should still spend ample time outside of the cage for excercise and to interact with their owner. If properly socialised, they can be kept in a household with other medium-large companion parrots, but each parrot should generally have its own cage.

In an aviary situation, African grey parrots should be housed in a single-pair aviary of at least six meters in length. Sufficient space for flight is essential to ensure they get adequate exercise.

An African grey parrot’s aviary should be protected from temperature extremes. They originate from tropical rainforest and are less tolerant of cold weather than many other parrot species.

Natural perches made from non-toxic branches should be provided. They will need to be replaced periodically as African grey parrots like to chew vegetation recreationally.

African grey parrots in the wild eat a mix of fruits, nuts, seeds, and insects. A standard parrot seed mix is nutritionally insufficient for this species, which should instead be offered a high-quality fruit & nut mix as the basis of their diet.

A significant proportion of their diet should be fresh food. Fruits, vegetables, nuts, and leafy greens should be offered daily and represent about half of their daily consumption. Uneaten food should be discarded daily to prevent contamination.

Suitable foods include apple, pear, corn, carrot, peas, mung beans, silverbeet (chard), kale, endive, peppers, almonds, and grapes. Commercial pellets can also be provided, but they should not form a substantial part of the bird’s diet.

A source of extra protein can be valuable during the breeding season. Live food, such as mealworms, will be consumed by some birds. Some breeders offer a small amount of high-quality dried dog food as a protein supplement. 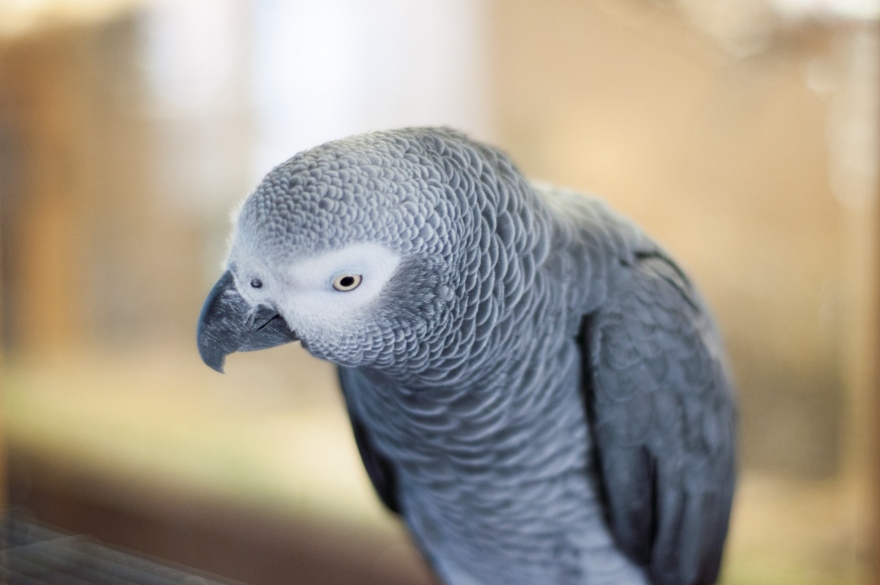 They breed in hollow logs or nest boxes lined with sawdust or pine shavings. A medium-sized nest box that’s a little over a foot deep is ideal, however different birds have different preferences for the size and shape of their box. Some pairs will roost in the nest box throughout the year.

Most parrots prefer a nest opening that’s just large enough to squeeze through, so a separate hatch for cleaning and inspection should be added. Different nesting receptacles should be offered to determine which the pair prefers to use. Disused boxed should be removed when laying has commenced.

They will lay up to three eggs, which are incubated by the hen for 3-4 weeks. After htaching, young birds will take up to three months to fledge the nest, and then a further three months to become independent from their parents. It is unusual for African grey parrots to attempt more than once clutch each year.

Several mutations have been established internationally, most of which involve the grey feather’s being replaced with white or pink. Selective breeding has also produced birds with vastly more red colouring than normal, with red feather extending above the tail and onto the abdominal area.

No mutations are known to have been established in Australia.

A strict worming regime and regular preventative treatment for bacterial and fungal infections is critical to ensure the long-term health of any bird. Regular checkups from an avian veterinarian are important for long-lived companion birds.

With proper care, an African grey parrot can live for 40-60 years.